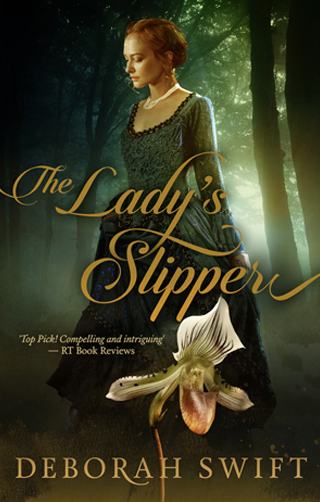 The King is back, but memories of the English Civil War still rankle. In rural Westmorland, artist Alice Ibbetson has become captivated by the rare Lady’s Slipper orchid. She is determined to capture it’s unique beauty for posterity, even if it means stealing the flower from the land of the recently converted Quaker, Richard Wheeler. Fired by his newfound faith, the former soldier Wheeler feels bound to track down the missing orchid. Meanwhile, others are eager to lay hands on the flower, and have their own powerful motives.

Margaret Poulter, a local medicine woman, is seduced by the orchid’s mysterious herbal powers, while Geoffrey Fisk, Alice’s patron and former comrade-in-arms of Wheeler, sees the valuable plant as a way to repair his ailing fortunes and cure his own agonizing illness. Fearing that Wheeler and his friends are planning revolution, Fisk sends his son Stephen to spy on the Quakers, only for the young man to find his loyalties divided as he befriends the group he has been sent to investigate.

Then, when Alice Ibbetson is implicated in a brutal murder, she is imprisoned along with the suspected anti-royalist Wheeler. As Fisk’s sanity grows ever more precarious, and Wheeler and Alice plot their escape, a storm begins to brew, from which no party will escape unscathed. Vivid, gripping and intensely atmospheric, The Lady’s Slipper is a novel about beauty, faith and loyalty.

The novel grips from the opening lines and carries the interest throughout. The several plot-lines are seamlessly blended and come together in a wholly satisfying conclusion. Her characters are so real that they linger in the mind long after the book is back on the shelf. Highly recommended.  Historical Novels Review Magazine

“It is a genuinely engrossing story, with characters you can get interested in.”  www.themum.co.uk

” Recommended for fans of Philippa Gregory and Rose Tremain, as well as students of the English Civil War.” Library Journal

“a delicately handled, loving recreation of a bygone era with all its incongruence.” The Truth about Books

The intertwined stories of the orchid’s fate, the mounting problems between the Quakers and the King’ s men, and Alice’s murder trial and its aftermath make for a riveting narrative.” For the Love of Books Blog