I knew nothing about Walter Ralegh, except the legends I’d been told at school; about how he lay down his cloak for Queen Elizabeth I. Was this legend true? Read more here on History Extra to find out.

In his novel, Fortune’s Hand, R N Morris treats us to a visceral interpretation of Ralegh’s life. This is an extraordinary novel. We experience it from multiple points of view, from the acorn that will grow to become the oak timbers of the ship he will sail in, to the teeming life within an old ship’s biscuit. Much of Elizabethan life on board ship is ugly and brutal. We are shown a thief having his hand cut off, and later we witness a massacre in Ireland, and wince at the way a horse might pick its way across a corpse-strewn field. Yet the writing of it is always lyrical, and Morris gives these events a strange kind of beauty. What impresses is that Raleigh experiences these things as part and parcel of his life – to him they are every day occurrences. We are really treated to the mind-set of an Elizabethan man. 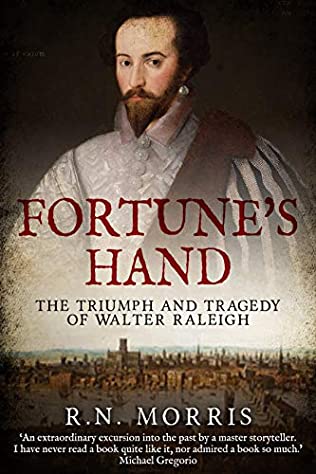 Ralegh is of course obsessed with gold, and we see his ambition and his turbulent relationship with the Queen. Yet his literary ambitions are also on show – the novel includes a whole scene after a tennis match written in blank verse, where the dialogue zips back and forth like a tennis ball as if we are in a Shakespeare play. Above all, this is a novel that explores what it is to be a historical novel. It is unlike any other historical novel of the period, and its skilful research and execution are much to be admired.

When King Gustav was a boy, all his French tutors were dismissed and taken away. New ones were appointed, true Swedes who would teach him respect for the common man and shield him from the follies of divine right. Voltaire thought of Sweden as the freest nation in the world. And Rousseau looked to the Swedes for a paragon of democracy. To him, the education of a child was a political matter. But King Gustav had a soft spot for French culture and soon established French as a second official language.

In the West Indies, meanwhile, the island of St. Barth was unremarkable and easily overlooked in the plethora of profitable colonies. From the royal thrones of Europe, St. Barth appeared merely as a speck overshadowed by Antigua and Martinique, Barbados and Guadeloupe, from whence came the cotton, tobacco and sugar cane. After the Seven Years’ War, King Louis XV was content to give away the whole of Canada if he could keep his darling Indies. By the 1780’s, having an island in the Indies was simply comme il faut. Everyone ought to have one.

But King Gustav of Sweden was without. He had learned that national wealth was no longer a matter of military might alone, but depended also on trade routes and natural commodities. The Swedes had been ogling the island of Tobago but it wasn’t to be. Tobago was the only redeeming piece from France’s settlement with England, so King Louis was not about to part with it. King Gustav, therefore, must settle for this obscure jut of rock named St. Barth and he decreed that a town be erected forthwith and bearing his name. In 1785, the Swedes opened the port of Gustavia to free trade.

By the 1780’s, there was a revolt brewing in Sweden – not as in Paris, fuelled by the masses, but rather by a stealthy elite made up of those with whom King Gustav’s governance had fallen out of favour. The King had taxed the aristocracy quite heavily in order to finance his campaign against Russia. Some said the King was a war monger who wanted to outshine his legendary predecessor Karl XII and restore the national glory of the Karolin troops. He was also a champion of culture and beaux arts, turning vikings into fops in the opinion of some. Among the conspirators against the royal throne was Carl Fredrik Pechlin, a baron who had long been one of the King’s chief antagonists in parliament. Pechlin sowed the seeds of insurrection, at his dinners, his firesides, his political salons. He had circulated copies of Thomas Paine’s incendiary political writings. The night before the King’s annual masque at the Royal Opera, the conspirators assembled at Pechlin’s house to fine-tune their plan for the assassination. The following day – March 16, 1792 – King Gustav was shot at close range while greeting his guests at the royal costume ball. But he didn’t die until some time had passed, and a few conspirators fled the country. That’s where my novel begins.