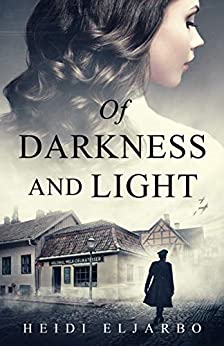 Of Darkness and Light is an engaging mystery of art and artists set in WW2 Norway. Heidi Eljarbo has certainly given herself a challenge – to write two historical periods in one novel which flow seamlessly from one to another, but the narrative works well and the two timelines inform each other beautifully. We begin the story in WW2 Norway where Soli works in an art shop. We see the shock of the invasion of Norway by the German army and what that means for Soli’s close family and friends.

As the book progresses, the art shop where Soli works is frequented by Nazi collectors of fine art, although the owner does his best to hide the most precious works from these men. When a murder happens right outside the shop, Soli finds herself irresistibly drawn into the mystery of who killed her colleague and why, and the puzzle deepens when Soli discovers that the victim, who she thought she knew well, is also known by another name.

At the same time a painting is missing from auction and Soli must uncover what has happened to it before the Nazis do. I can’t reveal too much of the plot without revealing all the twists and turns, but suffice it to say, Soli and her Art Club are drawn into the Resistance in their bid to save the art world’s cultural heritage from being stolen by the Nazis. Soli is an engaging protagonist, with the skill to tell a real painting from a fake, and the author makes the most of Soli’s ‘eye’ in giving us detailed descriptions of people and places. The reveal of what is inside the walnut and gilded frame is a highlight for me in descriptive writing.

As well as finely drawn detail within WW2 Norway, We are taken back to 17th Century Valetta, Malta, to the studio of Michelangelo known as Caravaggio, and his model Fabiola, again all described in sumptuous detail. If you love the art world and a good mystery, you will really enjoy this well-written book which has plenty of excitement and intrigue to keep you turning the pages.

Find out more about Heidi and her other books. 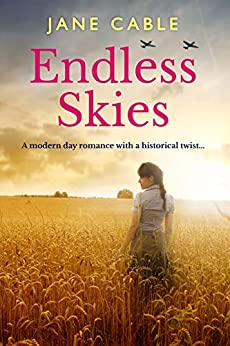 Endless Skies by Jane Cable is a contemporary romantic novel that harks back to memories of WW2. Archaeologist Rachel Ward’s relationships with men have always been a disaster.  Short-lived, and lacking in commitment. This novel begins to unlock why by gradually letting us into her past. Brought up by her grandmother, Rachel has a natural empathy with Esther, an elderly woman in a care home near where she is working. I really enjoyed the character of Esther, and thought she was drawn well without too much sentimentality.

The men in Rachel’s life are the dreadful, manipulative Ben, one of her students, and Jonathan, who is a property developer. An affair with Ben was always going to be a bad idea, but it also causes Rachel to look back at why she always makes such bad choices. Jonathan asks Rachel to do some work surveying what used to be a local airbase. This links up to Esther’s story, but I won’t give too much away.

One of the delights of the book is the atmospheric setting of the flat Lincolnshire countryside, and the deserted airfield which contributes to the idea that the ghosts of the past still have a bearing on what happens in the present. A thoroughly enjoyable read with multiple interesting strands.

Read more from Jane about the book.